Bullets and Brains is an arcade shooter set in a post-apocalyptic world filled with brain-hungry never-ending hordes of zombies.

We have been listening to your feedback, and we prepared new update. It contains a bunch of fixes and revamped Survival mode.

There are new special skulls that boost your abilities and two new enemies. Let us know what you think!

Bullets and Brains is still in development, and we will be adding more content in the future. We would really appreciate your feedback via this questionnaire

it will take you a minute or two to fill in. Or reach to us via ajvar.studio@gmail.com

Game have some problems with gamepad gameplay

Hey Zoda can you please be more specfic?

I dont know how but I went up and squezzed between some cars and managed to go beyond the map into a black void. It was survival and no zombies could get me...

Hey BoiFat, thank you for the feedback. We are working to fix issue of getting out of the bounds.

Wow! Really fun game, I loved it! You managed to get a great performance with all those features for the web version!

I have a similar game, and I'd love to hear your opinion on it https://beorgames.itch.io/hero-battle-fantasy-arena

Thank you Beorgames! Yeah, performance was a real issue.
Your game looks really nice, visuals are simple and the gameplay is engaging!
Keep up the great work!

Hello, I just got this game yesterday and I love it. It's definitely one of the best I've seen here on itch. Still, it's too far to reach the "r" to reload, especially in the heat of battle. As any experienced zombie killer knows, one single second could make a big difference, and push you closer to success or death, so could you please make it so you can reload with the right click on the mouse? Or better yet, make the controls remappable(not sure if that's a word...😅) that way, no one will have any problem withit. Thanks.

Thank you Gold-Diamond, much appreciated it! Regarding the custom mapping of the control, that would be a great thing to have, but since there is only two of us working on the game, we lack time, but that is something I would definitely like to add to the game later.
As for the, right click for reload, we'll add it in the update, which is coming hopefully in a day or two.

Alright, turns out the right click to reload didn't help as much as I thought it would, probably cuz you can't shoot while reloading (something I didn't notice before). Also, I always get an F every single time, even when I manage to destroy one of the nests before dying. In survival mode, I got a B on the first try and another F the second time, and I don't really know if I'm that bad at the game or if the scoring system works differently from other games I've played. Taking down the nests is also extremely difficult cuz you have to focus on so many things at once: there're multiple enemies coming at you from every angle, blocking your escape routes from the onslaught of the spitters firing their acid balls, and on top of all that, the nest also has its own (very effective) offense system. It'd be easier if you get more health packs along the way, or if the enemies spawned around the nests are not as much as they are elsewhere.

Why is the screen shaking...?

Hey dr!ppy, yeah we noticed that screen shake is maybe too much, we will reduce the screen shake in upcoming update, and later add an option to completely disable it.

Cool. At least with me, with the lag it makes the game basically unplayable.

Also, why are half my shots missing? Is that intentional? I thought maybe I need to actually put the reticle on the zombie instead of overshooting, but that didn't make it consistent either.

I am really not sure about shots, if you are aiming at the target is should shoot it. Is the issue with shotgun or rifle?

This game have a lot of potencial to start a new hype game!

One bug I found is the reload button,you can make an infinity bullet but this is cool to kkkk

Thank Coebin! Can you descirbe more about that bullet reload bug? We haven't noticed before. And yeah there will be secret character!

Reply
Swip the Swatch26 days ago

Really good game, love all the action. I'm not a fan of how the game instantly pits you into massive hoards. I'm cool if you keep it where you start the game not really knowing what to do, but it would be nice if it was a bit slower at the beginning to give a hang of the gameplay. Overall great game, just very big difficulty jump from the beginning.

Hey Swip the Swatch, I agree. The idea is to add additional tutorial level that will teach you the basics,  so you'll be properly prepared when going into the fight

Nice game love the graphics! This could pass for a mobile game get some adds and some powerups and your are set. The only thing I found that was too much was the camera shake. It would be great if the player could adjust the shake. I got to stream the game https://www.twitch.tv/migcreatesgame

Hey MigCreatesGames, thank you! There are plans for mobile versions. And regarding camera shakes I agree, we will probably add an option in settings to disable it.

Thank you, it may come in some of the next updates! 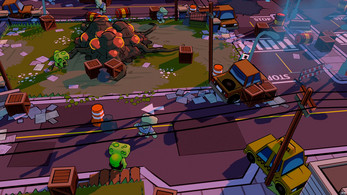 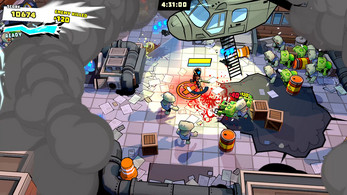 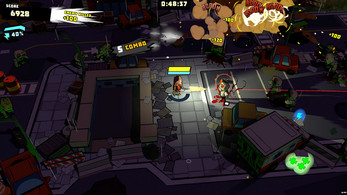